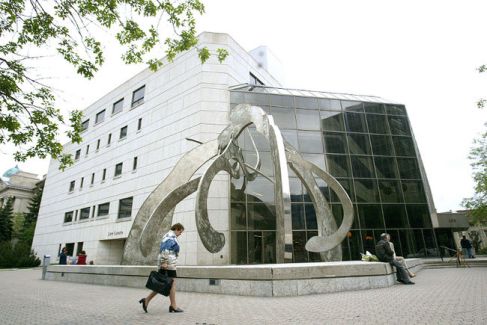 I could swear I saw pale-skinned, pony-tailed Peter Laporte look wistfully at his mother from the prisoner’s box.

She had just turned up in courtroom 120 to testify against him.

It was one of those bizarro moments in court proceedings you don’t fully expect.

I’m likely dead wrong, but from the half-second glimpse he gave the woman from across the sterile room as she came in, I thought the best word to describe his look was: ‘wistful.’

After all, it’s not like he didn’t know it was coming, what mom likely had to say.

She was asked questions and she answered each in a forthright, plainspoken and clear way — largely without emotion.

She’d smile once in a while when the lawyers didn’t get something she previously said exactly right.

Not all of his trial, but a good chunk of it.

I’ll glance over at him from time to time to watch how closely he’s paying attention, making extensive notes on yellow paper and consulting frequently with his defence lawyer, Crystal Antilla.

I’ve followed Laporte’s extensive legal saga at a court-ordered distance since Nov. 25-26, 2008, when I exclusively uncovered his case for the Winnipeg Free Press.

Laporte’s pleaded not guilty to a list of serious charges, including ones relating to the alleged aggravated sexual assault of an eight-year-old boy.

And from what I’ve heard so far, not one witness called by the Crown could place him at the scene of any of the crimes.

To the alleged victims, the attacks were random, committed by a total stranger to them.

So far, by my reading, it has all the hallmarks of a classic ‘identity case’ — where it’s unclear in fact or law if the right suspect is the one police charged with the crime.

That all appeared to change Thursday afternoon, when Laporte’s mom testified that it’s her son on surveillance footage from the two apartment blocks where the crimes took place.

While that fact alone doesn’t mean anything in and of itself, it does place Laporte at the scene, thus creating tough hurdles for his defence to overcome.

I mean, when you have your own mother say (essentially), ‘Hey, that’s my boy there’ on video guiding a kid into an apartment stairwell just moments before a serious sexual assault takes place, that can only definitively be called one thing at this point: problematic.

Nevertheless, Ms. Laporte’s testimony may all come to naught.

Antilla will argue strenuously to have the mom’s testimony struck from the record based on an as-yet unrevealed legal argument.

But what really struck me about Lucille Laporte’s evidence is how it was obtained by police.

Laporte has been in continuous remand custody since Nov. 23, 2008, the day the allegations arose.

But it wasn’t until summer 2010 that sex-crimes investigators asked two colleagues completely unconnected to the case to bring Laporte’s mom in at the behest of the Crown to watch a few edited clips of surveillance footage from two apartment blocks in hopes of cementing the accused’s identity.

The mom wasn’t told any reason why she was being asked to look at the footage.

She was only asked if she’d come in and watch it to see if she recognized anyone.

The exchange was, unusually, videotaped in a PSB office at Sgt. Cheryl Larson’s desk.

The mom is shown clips from a Cumberland Avenue apartment-block lobby (her own building).

“My son, Peter Laporte,” she says after viewing the entire clip. “I recognized him as his face turned to profile.”

She’s shown more clips of the inside of human shapes shifting inside a Mac’s store adjacent to the building.

She’s then shown the lobby surveillance from the separate building where the boy was attacked.

“And then there’s Peter again,” she tells Larson. “Peter Laporte, my son.”

Larson plays her another clip — again of the Mac’s store.

“Body shape, I’d say that was Peter,” she says, but adds she can’t be sure.

She’s shown one more clip of the lobby of her own building, where she at the time had lived for more than a decade.

She said much the same under direct examination from Crown attorney John Field, who played her the video of her with Sgt. Larson as corroboration.

Ms. Laporte also divulged a number of other background details about her son.

Locked in a custody fight for his young daughter, Laporte came to live at his mom’s place in and around September 2007.

Prior to that, he had been gone “a very long time,” she said, later adding the last time before then she saw him was 2001-02.

She was told her son was in custody.

After going to see him at the Winnipeg Remand Centre, she learned Laporte had been charged with attacking a woman in her building, she said.

Laporte’s version went something like this, according to her testimony:

He had been trying to help a woman who appeared, bloodied, at the building’s entranceway.

He let her in to use the phone in the apartment, but after coming upstairs with him, she changed her mind and produced a bottle of wine.

They wound up in the stairwell, but later moved to the laundry room and drank until they passed out.

The next day (Dec. 16 2007) police arrest him and charge him with attacking her.

“He told me she had a bleeding nose, blood on her face,” Ms. Laporte told court. “He didn’t think (her injuries) were severe.”

Laporte said her son came home in November 2008, saying that “lab work” had “exonerated” him and the charges were dropped.

Court records show the charges were stayed about 10 days before the allegations Laporte is now involved in fighting came to light.